Greetings and thanks for dropping in. My name is Louette. I am the Saylor in Saylor American Bulldogs. I grew up just outside Arab, Alabama, which is your typical, small southern town. I have always loved dogs, especially large ones and living in a rural area, afforded me the opportunity to grow up with a wide variety.

I have owned and had experience with American Bulldogs, APBT’s, Rottweiler’s, Cane Corso’s and many other bully or large breeds most of my life, thanks in big part to my father, Joe. He has a condition called Retinitis Pigmentosa and is completely blind, but he has never let that slow him down. He is truly my inspiration! He’s an amazing man and a bulldog lover! I’m sure my love of dogs came from him. 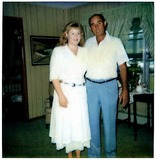 When I met my husband, Tommy many years ago, it was the love of an American Bulldog that brought us together. I had just lost a beloved American Bulldog named Kay. He was a great working dog, tough as nails!!! Kay was my boy, but my father often borrowed him, as he co-owned a small hog farm with anywhere from two to two hundred hogs at the time.

Kay would run several miles just to reach the property where the hogs were kept, often making trips several times a day over very rough terrain. He could catch or herd as needed. He was the true definition of a real, working bulldog. Sadly, I lost Kay at only 3 years old. He was poisoned along with several pets and hunting dogs in our community. I was heartbroken and devastated at someone's cruelty.

Tommy knew how lost I was without Kay. He found another American Bulldog puppy who could have almost been his twin. We named him Harley. I guess it was then, I realized how much Tommy cared for me. My mother has always said he won my heart with that dog!

Harley was a very special boy. Not only to me, but to Tommy as well. We had Harley for 11 wonderful years. I can’t tell you how close I was to him, closer than I have ever been to most people. We lost him to cancer in May of 2004. I had never seen Tommy cry until the night that Harley died.

We were both still grieving over our precious boy when we found Doc. Doc looked so much like Harley. Doc could never be Harley, just as Harley was never Kay. You have to love and accept each one for what they are, and we love them all!

Though my family kept American Bulldogs on the farm through the years, we never gave much thought to showing or dog events.  That is until we ended up with Doc. I found out about an American Bulldog specialty show called the Heart of Dixie. We had never even attended a dog show and had no experience with conformation or showing, but decided to give it a try for fun.

We entered Doc in his first show in the 9-12 month old puppy class. He won 2nd Place his very first time in the show ring! I’ll never forget the judge’s comments. He said there was nothing wrong with the dog, but the handler could use some work. We had a blast and were hooked! Through the years and with several different dogs, we have enjoyed our time learning, making new friends and of course accomplishing good things with our dog family.

I say dog family because that is what we are. We are just simple country folks. Tommy and I have no children of our own, so our dogs mean the world to us! We still live in a rural area on land that has been in the family for generations. We have around 5 acres with our homestead that is partially fenced in for our dogs.

We also own additional tracts of property near our home that includes several fields, wooded areas and a pond. All the dogs love to swim, chase things and just run wild when they can.  We enjoy living life to the fullest and sharing it with our family and dogs.  So that’s pretty much our story and just a little more about us.

For more about our dogs, please be sure to visit their individual pages. Thanks for stopping by!!