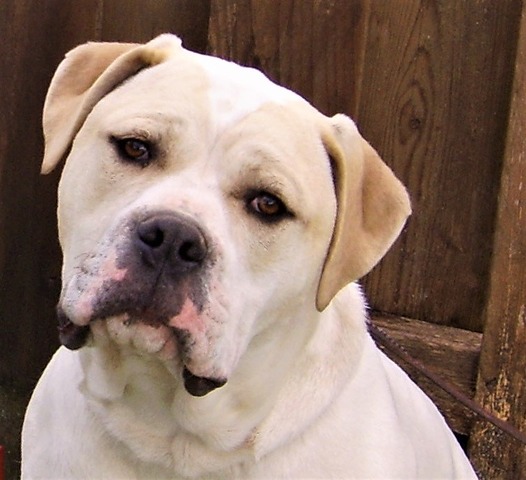 Hunter was a big, blocky boy.  He championed out early and earned a lot of nice wins on the show scene.  His Sire was Saylor's Doc Holliday, and Dam was Saylor's Goldilocks. He was a belly brother to our GRCH Saylor's Crackerjack Attack aka Red Dog.

Red Dog and Hunter grew up together, so they formed a natural bond and always remained close.  We used to laugh and say Red Dog was the brains and Hunter was the brawn.  They made the perfect dynamic duo growing up.

Tommy wanted to keep Hunter from the very beginning, as he developed a real soft spot for him.  Hunter was a nicely balanced male with a gorgeous head. He had many nice qualities such as deep, full pigment on the eyes/nose. He had nice structure, yet moved well for a big boy.

Hunter had a wonderful, easy going temperament and was generally always a gentleman. He paid attention and listened well.  He had medium drive and was usually always calm, cool and collect. Hunter loved to play ball. He would fetch as long as someone would throw for him. He loved to romp with our little nephews and always showed a very calm, polite, and easy-going nature around the kids.

Hunter was used for stud service several times, and produced some very nice pups in the past. He has one Champion son, and a daughter who is very close to earning hers. We're certain his good qualities will live on in his offspring, just as was passed on to him from his beloved Sire & Dam.