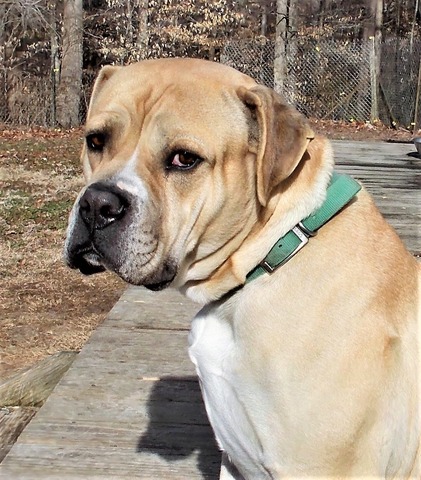 Jekyll was our keeper from the 2010 Goldilocks X Doc Holliday litter. He is a beast! He looks similar to his Pappa, Doc but is a shade lighter and built more like his Dam, Goldi. Jekyll is thick, muscular and powerful! Sometimes I don't think he even realizes his own strength.

He moves well and has nice conformation, but could use better angulation.  He is a little straight in the stifles. Jekyll has a really nice head and would be a great stud consideration for someone looking to add size, bone or color to their line. He has excellent drive with both food and toys.

Jekyll is more of a one person dog or a one man show.  He is our property guardian and is constantly on patrol.  He is continuosly watching anything and everything going on in his surroundings. Even though he has great protective instincts, he still has a nice temperament towards people, but can be a little dog aggressive with his dominate personality.

He is not fond of other large males and even some females. He is a quick thinker, fast learner and is always eager to please though. He has leveled out some, now that he has gotten older, however he still needs a firm hand. Even so, he is an awesome boy and a pleasure to have around.